by Peter Stevenson on June 4, 2020 under hamradio
3 minute read

I am using a Icom IC-E208 and a “MMDVM_pog” HAT to make a GMSK DStar gateway. 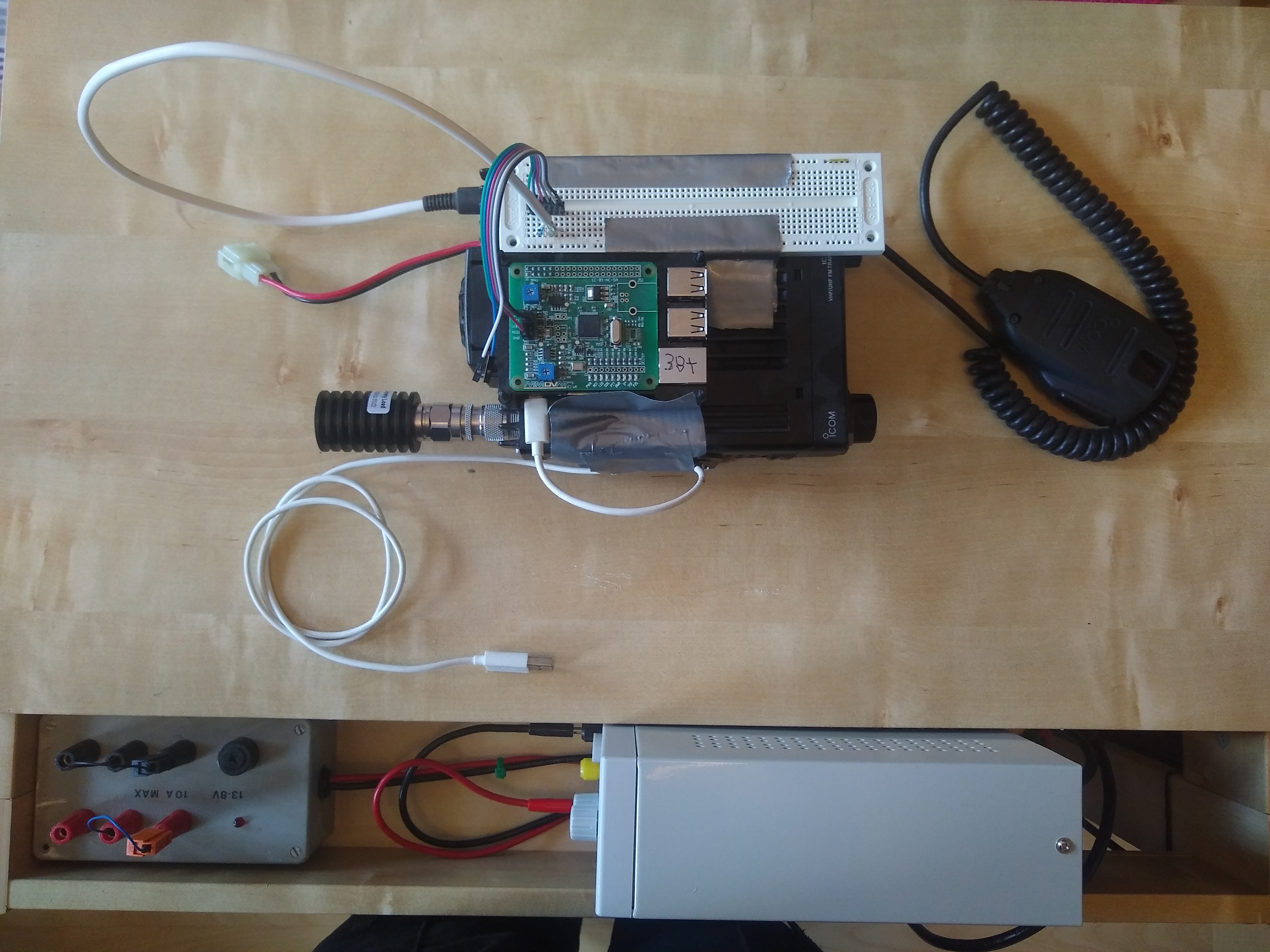 Requires Pi-Star beta image for Raspberry Pi 3B+ at time of writing.

I connected the modem pins “GND”, “TX”, “RX” and “PTT” accordingly to my radio. You need a radio with a “DATA IN” jack accepting 9600 bps GMSK. The radio must also support 2.5 kHz FM narrow deviation.

The “SQL” pin of rig doesn’t seem to be needed for basic setup.

The “RSSI” pin of modem doesn’t seem to be needed for basic setup. 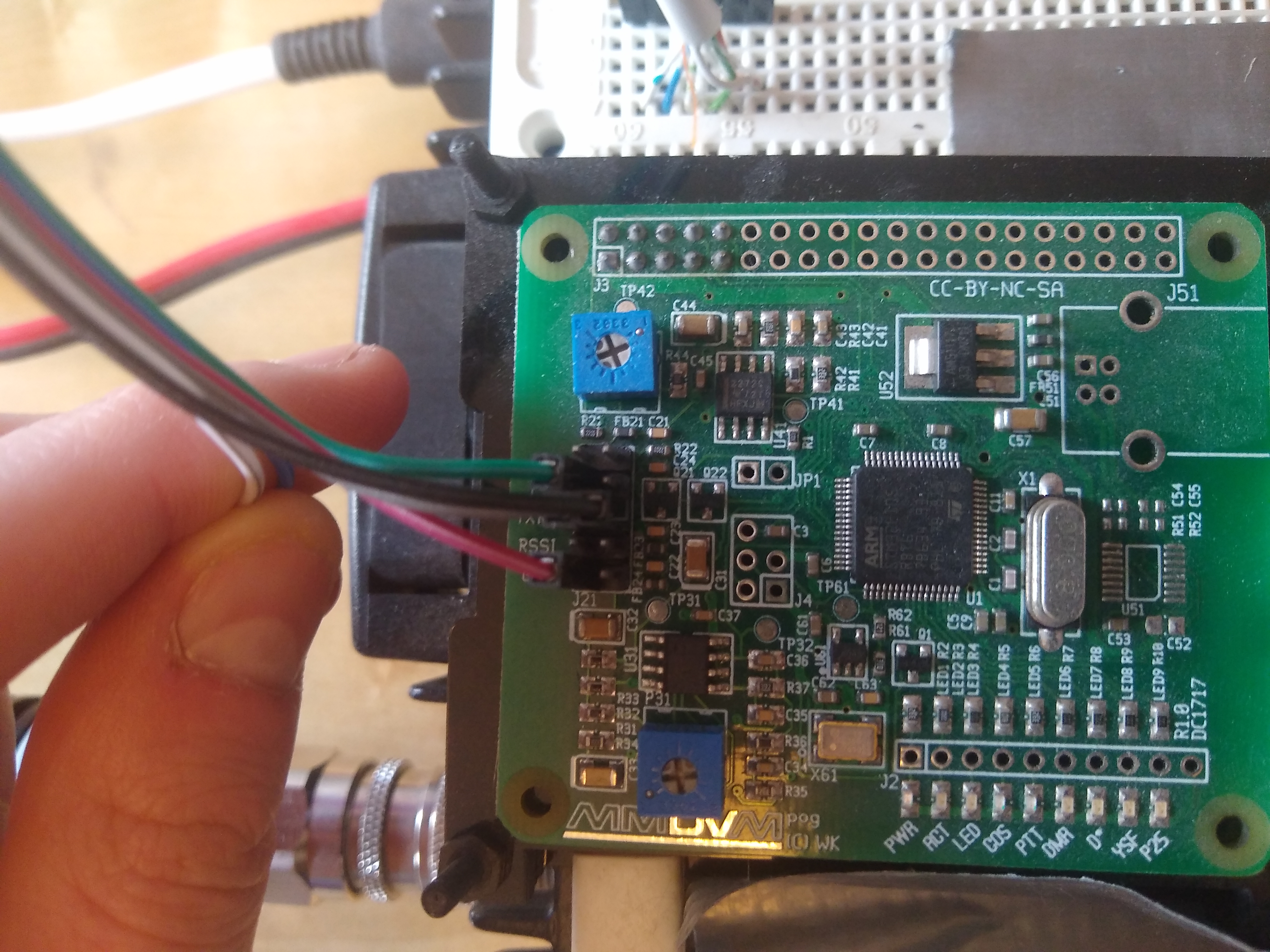 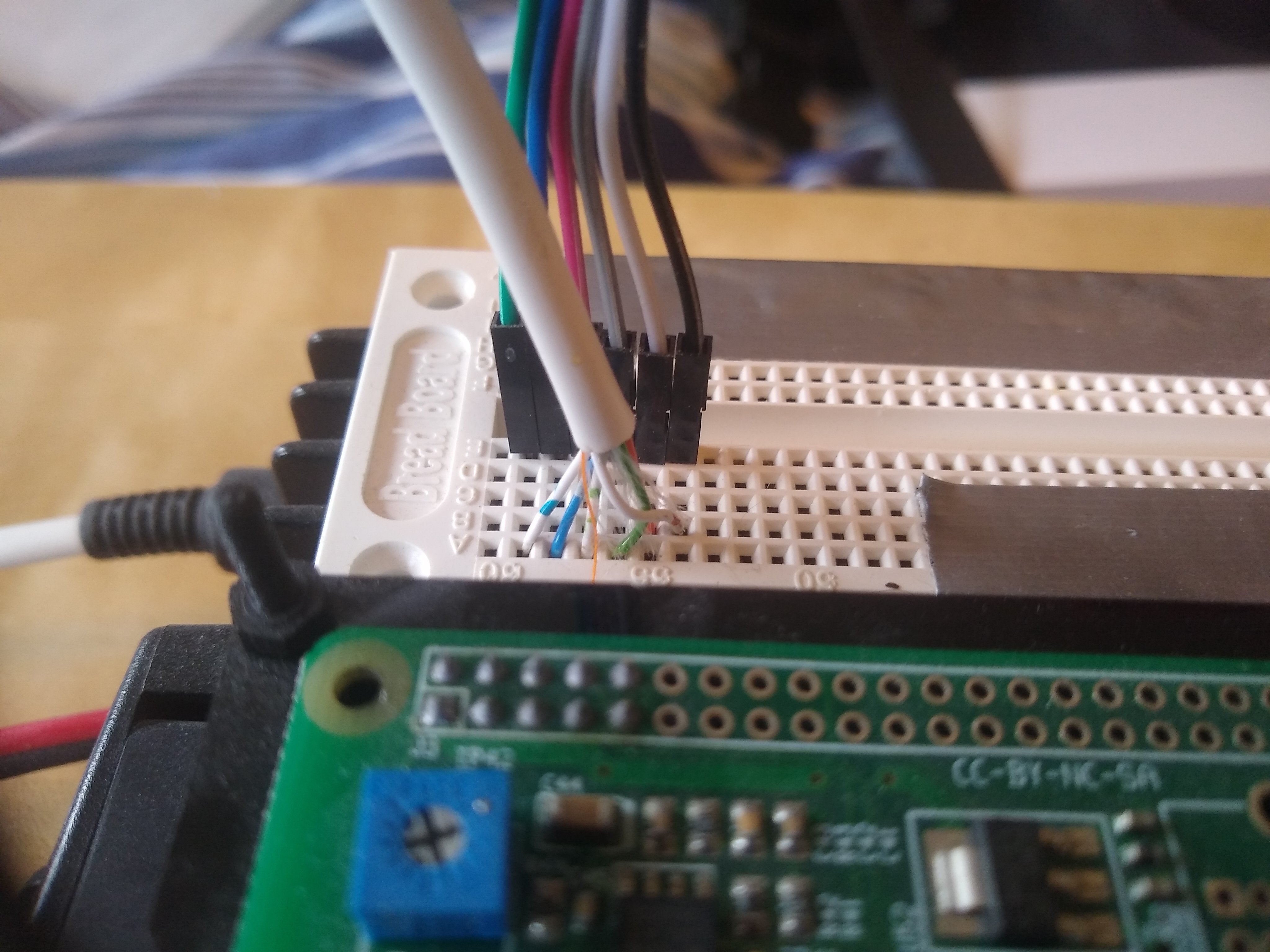 The pinout is the same for a ID-E880 which is nice! Picture is of a setup with the HAT I now recommend see the below heading “Issues”. 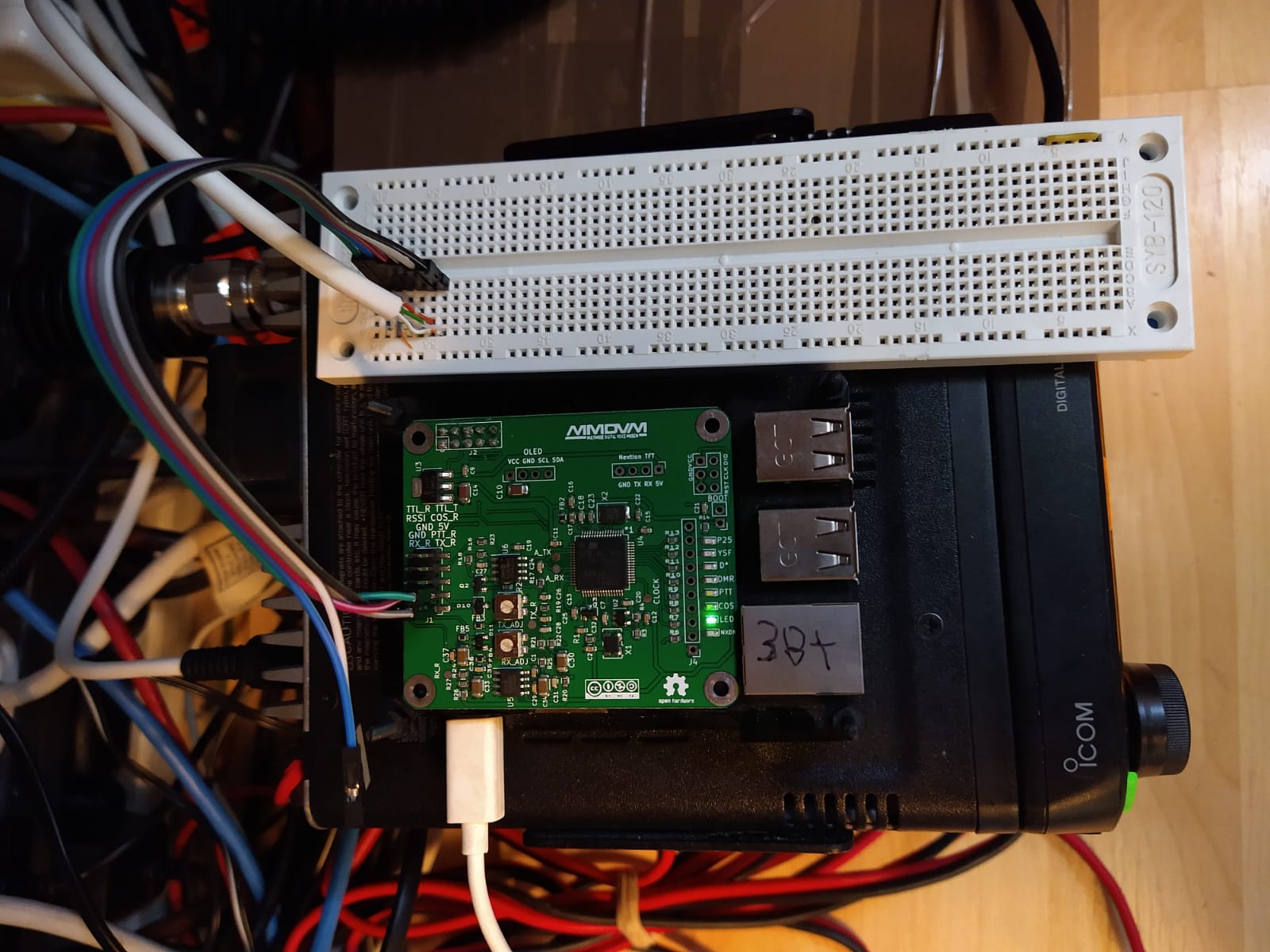 TXInvert was default 1, for some radios like mine you may need to change it to 0 however in my case I later found my radio was off frequency and upon correcting it I had to put txinvert back to original value.

“Radio/Modem Type” either option worked for me:

There is a couple trim pots on the board which allow you to adjust the mic gain. Use the ACL meter on the radio to gauge this.

Use a SDR or spectrum analyser to check the radio is on frequency see: IC-E208 Calibration

Pi wont boot with the HAT on

I had to power up the Pi with no HAT then add the HAT once the Pi has booted a bit. Not ideal because it wouldn’t easily recover from power outage. Also causes more potential for pins to misalign or make contact at different times with power/data.

I tried changing the cmdline.txt to remove the serial0 console in case the HAT was firing some serial command at boot. This didn’t help.

I noticed my friend Rob (2E0RPT) had a different looking PCB layout on his MMDVM HAT he bought from eBay. He confirmed his Pi 3B+ cold booted just fine with the HAT on. So I wondered if this was a hardware problem with my Pi or the HAT. Rob actually offered to send me his HAT to compare. After testing with his HAT the Pi booted just fine however the PCB lacks version or author information. Perhaps shop for one that looks the same, see the below image of the board I now recommend instead of the board I show above with two blue POTs: 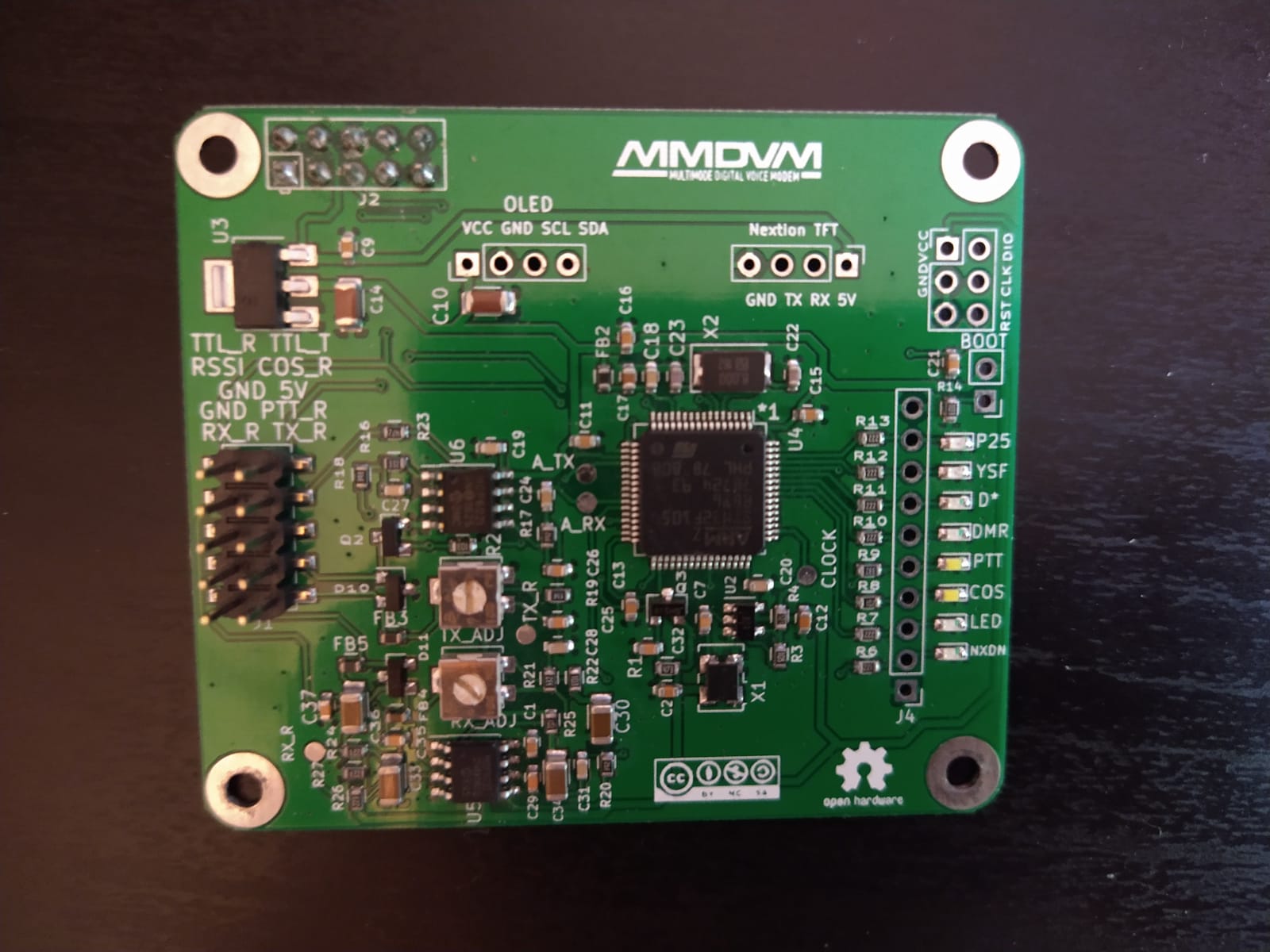 Ensure suffix of call sign for gateway is not just a space but its last char of input string.

I had some issues changing the gateways call sign without re-flashing.

Also see the DVAP page on my website: ham-radio/dvap

My friend Rob (2E0RPT) took pictures of the document he received with his board. I didn’t receive any such documentation with mine. 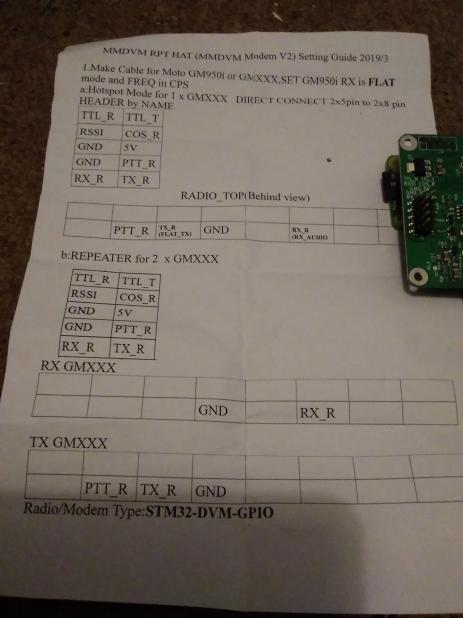 MMDVM, SDR, GMSK, Raspberry Pi,
I feedback.
Let me know what you think of this article on twitter @M3PGS or leave a comment below!
comments powered by Disqus